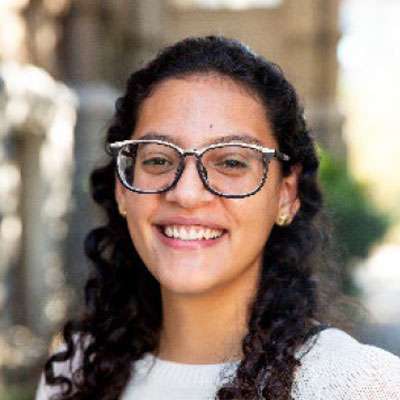 “When I think of this student, a set of words comes to mind: dependability, initiative, maturity, motivation, creativity. She is the kind of student any professor would want in her class: enthusiastic, intellectually engaged, present, consistently well-prepared, ready to question and to offer suggestions. Having her in my class was a real asset not only because she was a model student but because we all learned from her the joy of scientific inquiry”

“Growing up a military kid meant adaptability was second nature. Getting accustomed to new places, new rules, new environments is something that every military kid learns, and yet coming to college as a historically underrepresented first-generation college student meant many of my peers already knew the rules and how to survive in this highly competitive environment. College has been the hardest move I’ve had to make in my life, which by the time I was twenty-one consisted of six cross-country moves. It was directly the discipline and resilience that I learned from the military that has helped me succeed mentally and it is directly the support I have received from the Anchor Scholarship Foundation (ASF) that has helped me succeed financially.”